JEFFERSON PARK — I visited Briar Common this week to sample their beers after getting a preview at this year’s Chef and Brew. The space itself is awesome – a classic brick corner building in Jefferson Park, revamped inside and out. The gleaming 7-barrel brew system is on prominent display and a nice long bar with minimalist tap handles.

I found the beers to be thoughtful and well executed, which is no surprise, as co-owner, Greg Dawson is a cicerone and BJCP judge.  Kent Dawson, also co-owner, and head of ops, rounds up the team with their third brother and co-owner, Travis.

Elisa Cohen wrote about the food, which was top notch.  All I can say is I got to try three different variations of potatoes, which warms my heart … but of course, I am here for the beer!

Briar Common has six beers on tap at present, and of course, I tried them all.

I started with the Joyce Saison, 6.7 ABV, 35 IBU.  This beer had a touch of biscuit malt and a wheat tang, balanced by the fruity esters from the yeast.  It finished with a light smack of citrus.  You could taste the aromatic malts in this beer!

From here, I moved to the Lanham, a Belgian Trappist-style Dubbel. Trappist beers are a cult among themselves.  There are only 11 true Trappist breweries worldwide, so most domestic versions are clones or revamps of classic recipes.   As a home brewer, I find Trappist-style beers a delight to make, and even better to drink.

The Lanham clocks in at 7.5% ABV, and 33 IBU. It started with a light sulfur nose.  This beer was chewy, with flavors of Munich and roasty Vienna malt shining through, balanced by a mild sweetness and a figgy dried fruit flavor.

The Hobart was next, a Belgian IPA, 8.5% ABV, 100+ IBU.  This beer has a super-delicate citrus flavor and a solid bitter backbone.  It was crisp and robust; I loved it and could have easily had a full pour.

The Rochus, an American Porter, was next, at  6% ABV, 40 IBU.  The Rochus has a nice chocolate malt nose and a slight bitter chocolate tang from the malt and the addition of co coa powder.

The Briar, an American Pale Ale, was the beer I chose to accompany my meal.  At 5% ABV and 50 IBU, this beer was balanced a balanced, golden easy drinker, paired nicely with all the dishes that I had the chance to sample.

The Thistle (8.5% ABV, 100+ IBU) was gorgeous.  I am crazy about hops; it’s not a joke in my life.  Many believe West Coast IPA’s ruined beer, but I believe those people are wrong.  A nice bitter base is what I crave in beer, and the Thistle delivered.  The Pils malt in this provided a lovely backdrop for the Galena, Cascade, and Columbus hops.  The body was onthe light side, but that just gave more oomph to the hops. 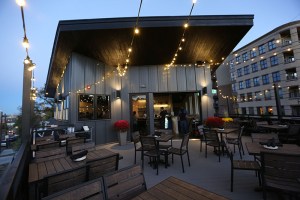 Overall, Briar Common is 100% worth a visit.  When the weather cooperates, the rooftop patio will be a great place to peep at the Denver skyline.  Driving may not be your best choice because of nearby parking restrictions, but Jefferson Park is an easy jaunt from every North Denver hood by bike or by Uber.

I am especially pumped to come back for Monday BBQ night and to continue to drop in and try their beers as the list changes and evolves through the seasons.

What else is happening?

While just outside North Denver, Yak and Yeti Brewpub is a Denver tradition, paring Nepalese food with tasty beer in an old Victorian house.  Yak and Yeti will host a Thali Beer Dinner on December 13; Tickets are $ 55, and you can expect a five-course pairing of Nepalese, Indian and Tibetan foods paired with beers crafted on site.  Yak and Yeti is a staple and beer, and Indian food go together like peanut butter & jelly.