We're all thinking it: Who's the guy with the glasses in the lower-left corner? He's making some… interesting faces. #MakeDCListen

The charismatic Sen. Ted Cruz has a way of commanding attention when he’s speaking, but during his anti-Obamacare speech on the Senate floor this afternoon, viewers couldn’t help but find their eyes drawn to someone else:

Ted Cruz filibuster – who's the guy in the corner of the screen with his mouth agape? Does he know he's on TV? https://t.co/cy1TN34fbp 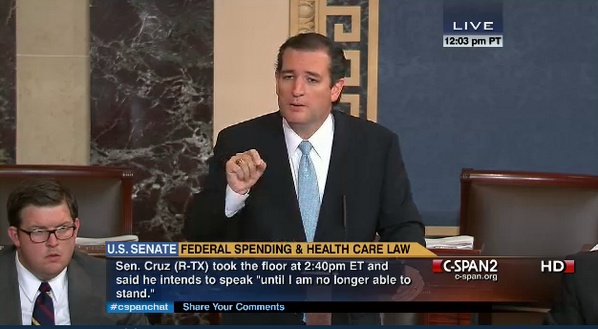 Watch out for Corner Guy!

I love this guy. He is my everything. RT @bennyjohnson: Corner guy getting suspicious. pic.twitter.com/zgz1wbdYJt

So, the million-dollar question:

WHO IS CORNER GUY!? pic.twitter.com/CuChULjL7k