Cooper the Brave inspires a community

NORTH DENVER — A throbbing flash mob with throngs of friends and family descended on the Deming-Hudson household in September. The community gathered around the home of 12-year-old Cooper Deming waving posters and singing and dancing to Cooper’s two favorite songs, “Living in the Hall of Fame” and “Welcome to my House.” For Cooper and his family, that outpouring of community love was a welcome mat much needed.

The Deming-Hudson family entered a life altering crash course when the young Skinner 7th grade student was diagnosed with a rare form of brain cancer days after school was released last summer. It wasn’t in his plans. He had summer ahead to run and play and hang out with his buddies. Instead he and his twin brother and sister, Calvin and Helen, and his parents Scott Deming and Amy Hudson were forced to grapple with a new normal that took the cross-country runner from Skinner off the running track and metaphorically speaking, forced him to become a hurdle jumper. As a family, they have been jumping hurdles ever since. 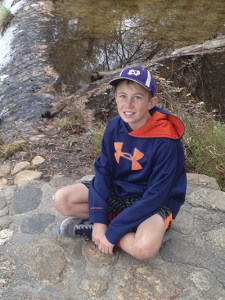 Cooper just completed a grueling series of thirty radiation treatments on October 13.  Amy Hudson said of “Cooper the Brave” (one of the optimistic posters his friends made for him), “He is doing remarkably well. He gets sad and frustrated and scared, but he is upbeat and says he is going to beat this thing.” Undoubtedly a parent’s worst nightmare, Hudson reflected on how his strength has kept her going. “The beginning of radiation was rough; he was so weak. He looked so sad, which made me sad. Then he would look at me and give me a big, big smile.” He said, “I’m going to keep smiling like that until this is through.”

Along with his infectious smile, miles, and miles of huge community smiles and largess have followed in the wake of his diagnosis. Kids have snuck in and wallpapered his room with encouraging posters. The flash mob organized by Kerry Morrissey was according to Amy Hudson, “The most touching thing I have ever experienced in my life. It was incredibly brave for the kids to come out to show their support. I felt this wave of energy that ‘alright we are going to make it through this.’ I felt lifted up.”

Skinner’s social worker and extraordinary human being, Joe Waldon, developed a support group for students and families to help them cope with Cooper’s illness. The wood shop teacher, and equally extraordinary man, Mr. Duran, concocted a plan with his students to bring a home run to the boy whose sport passion is baseball.

Scott Deming said, “Once again the generosity and love shown by friends, classmates, and teammates continues to amaze our family. After a brainstorming session with Cooper’s friends, the shop teacher at Skinner Middle School took a piece of ash and turned it into a beautiful baseball bat. All the kids then engraved their names in the bat and they all delivered it to Coop. To top it off, the bat was given to Cooper by former Colorado Rockies player Ryan Spillborghs who then stayed and talked baseball with Coop and even face-timed his favorite player Nolan Arenado to say hi. We are all so grateful to Skinner Middle School and the Colorado Rockies for making Cooper’s day.”

On October 13 the family arrived home to their entire house decorated with posters, banners and balloons. Scott Deming, wrote, “Once again, Amy and I are overwhelmed by the show of support from neighbors and friends as we returned home from Cooper’s 30th and FINAL radiation treatment. Thanks to all.”

Amy Hudson has left the workforce to care for Cooper, and the community has rallied to make meals for the family every day, donated money for their mounting bills, and come to their home to care for the younger twins. Brown teachers have been there to help the kids with homework, and community businesses have offered support through fundraising efforts.

Michael Guiettz and Kim Collie helped students organize a fundraiser at their home before a recent Broncos game. Little Man donated ice cream and the students fearlessly approached all who were bustling to the game, selling ice cream and collecting money for Cooper. They raised close to $ 2,000 in two hours.

Janine Vanderburg, President of JVA Consulting, was so inspired by the students that she wrote a beautiful blog called, “What can Brown and Skinner students teach us about important fundraising lessons?”

She reflected on the day, and the students approach, “At least a block from the booth, children approached us. Their pitch? “Our friend Cooper has a brain tumor. Can you donate to help? And you can buy ice cream too at that booth.”

We walked down to the booth—and yes, we bought ice cream—then watched as the kids kept running to the booth with fistfuls of donations they had secured. I wondered how they were accomplishing that, since their “prospects” were people intending to get to the Broncos game as quickly as possible.

She asked them. The fundraising lessons she learned from the children were to lead with your heart, be clear with your pitch, don’t be afraid to ask, be okay with a “no,” and treat fundraising as a team sport. She summarized, “Parents at Brown International Academy and Skinner Middle School used their networks to get flyers made, publicize the event and obtain a permit to sell outside the stadium. The ever-generous Little Man Ice Cream donated the ice cream. Parents organized and supervised the kids. And the kids, of course, asked.”

To read the entire blog and watch the video that inspired her: http://joiningvisionandaction.com/four-important-fundraising-lessons-ice-cream-cooper/

The community fundraising continues. Little Man will be selling their 2016 Scoop Camp tees in honor of Cooper donating $ 5.00 for every tee shirt purchased.

On December 4 from 3-6PM, Local 46, one of the family’s favorite local joints, will be hosting a Hudson-Deming Family Fundraiser. They will be donating 30% of their sales during the event to the family. Nicole Bauman, with other close friends, is organizing the gathering. Bauman said, “Scott is now back at work, and Amy continues to stay home to care for Cooper.  To continue to help defray the costs of medical bills; lost income; physical, occupational, and other therapy; as well as numerous other expenses we are looking forward to great food and libations, and to support a local family in need who has given so much to our community.”

As the Thanksgiving season nears, it is a time to reflect on those things we are thankful for. Cooper Deming is first and foremost one of them. He is an inspiration to all. He has brought out the best in our community, and lives up to the words his friends have bestowed upon him. Courage. Strength. Endurance. Love. Spirit. Faith. Hope.

“Cooper the Brave” is a courageous hero amongst us. We wish Cooper and his family speedy healing and good health.

Donations may be made at https://www.gofundme.com/cooperdeming.